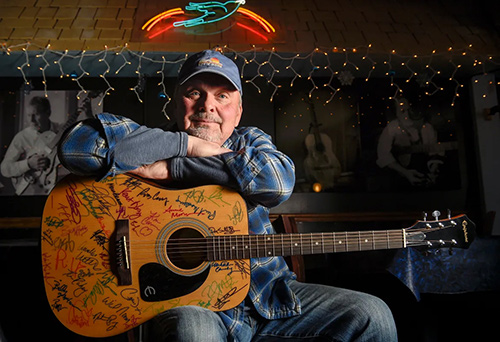 Experience the legendary singer songwriter Kent Blazy, one year after his induction into the songwriter hall of fame! A special night with this incredible musician is sure to leave a lasting impression on you and your guests.

Kent Blazy grew up in Lexington, Kentucky, playing in various local bands. By the mid-’70s, he was touring as a guitar player for Canadian legend Ian Tyson. After a first-place win in a national songwriting competition, Kent decided to make the move to Nashville. In 1982, Gary Morris sent Kent’s “Headed For A Heartache” to No. 5 on the country chart. Soon after, other cuts followed with The Forester Sisters, T. Graham Brown, Donna Fargo and Moe Bandy.

In 1987, Kent was introduced to new demo singer Garth Brooks. The two began writing together, and their first collaboration, “If Tomorrow Never Comes,” became Brooks’ first No. 1 single and NSAI’s 1989 Song of the Year. Their writing partnership yielded four additional Top 5 songs with “Ain’t Goin’ Down (’Til The Sun Comes Up),” “Somewhere Other Than The Night,” “It’s Midnight Cinderella” and “She’s Gonna Make It.”

Kent also was a co-writer on the Brooks & George Jones duet “Beer Run,” as well as on “That’s What I Get For Lovin’ You” by Diamond Rio, “My Best Days Are Ahead Of Me” by American Idol finalist Danny Gokey, and “Gettin’ You Home (The Black Dress Song)” by Chris Young.

All donations for this event go to LASSO Horse Rescue.